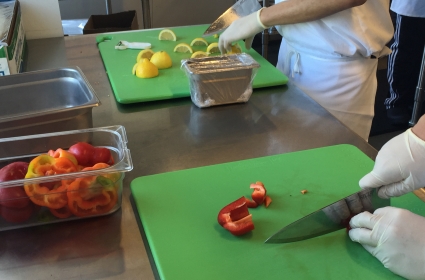 Louis, a high school student, graduated from FareStart’s Youth Culinary Program this spring even though he had an extra challenge other students didn’t have – Louis was the one and only student in the morning cohort, as his would-be classmates had dropped out of the program.

The 8-week training program is usually made up of a cohort of a few students, but Louis found himself the only one who showed up. Youth trainees normally become very close and they support each other and push each other to succeed, but Louis, a class of one, motivated himself and found other sources of support. “I was struggling in the first week being the only one in the cohort,” he said. “But, after the second week, I just rolled with it. I liked being in the kitchen, most definitely.”

Louis thrived in the program – showing up on time, having great attendance and taking advantage of the opportunity he had in front of him. He received not just culinary training, but also high school credit, a stipend, access to counseling and job readiness training – all free of charge. “I learned knife skills and all about the pans and kitchen vocabulary,” he said. “I memorized recipes, and those knife skills they taught - I would have cut myself before this program!”

He hadn’t had any prior cooking experience, but he had gone through other programs offered through the Seattle Public Schools’ Interagency Academy, FareStart’s enrollment partner for the Youth Culinary Program. “I did the other programs offered,” he said. “But I heard this one at FareStart was the best, so I saved it for last.”

He had never really thought of food as an industry before the program. He used to just go out and eat hamburgers, but now he can make them at home.

“I like to cook more than I thought I would. It’s just relaxing, you know? I learned a lot in this program too. I can do things for myself. I can be independent. And even though I had to get up really early in the morning, I just told myself ‘I’m going. I’m going to Culinary.”

Louis was first introduced to the Interagency Academy after he ran into some trouble, but through the support of the school, his teachers and programs like Youth Culinary, he is in a good place, is staying in school, and things are going great at home. His mother and siblings came to the program graduation ceremony held at Pacific Tower.

He has some advice for other students thinking about going to the Youth Culinary program. “Ask as many questions as you can,” he said. “I asked as many as they would let me!”

Did you know? FareStart’s Youth Culinary Program operates out of our Pacific Tower classrooms and cafe on Beacon Hill. In 2018, 62 teens enrolled in the program, 31 of them got jobs, and 31 of our culinary program graduates received their high school diplomas!