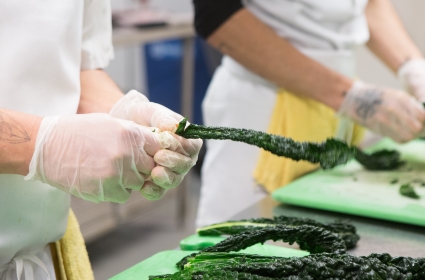 Rob was living on the streets with nothing but a duffel bag and a tarp after he was released from incarceration. He went to every resource center he could find to try and better his situation, but when he found FareStart he was housed within the same day as his interview.

He worked hard acing every test, pushing himself outside of his comfort zone and facing every challenge with a positive attitude.

While attending FareStart, Rob took steps to improve his life on his own initiative. He identified a sponsor and started attending Recovery Café, a clean and sober nonprofit to support people during recovery. He also pulled his credit report, opened a checking account, found a medical provider and set up family counseling.

“I was going to take whatever FareStart could offer me,” Rob said. “They gave me everything.”

Rob always had a smile on his face and asked insightful questions of the chefs and staff. For his graduation ceremony, he dressed up in cap and gown.

After graduation, he found permanent housing where he is managing a clean and sober house for people in recovery. He works at a prestigious, Seattle restaurant where he has already been promoted from the sauté station to overseeing three separate stations including the grill.

“FareStart works. I’m living proof of that. Not too long ago I was living on the streets, homeless and now I have a full-time job, a clean and sober house and a future and I’m not done yet.”

Students like Rob got the chance to change the direction of their lives because of support from the community. Be a part of that community.