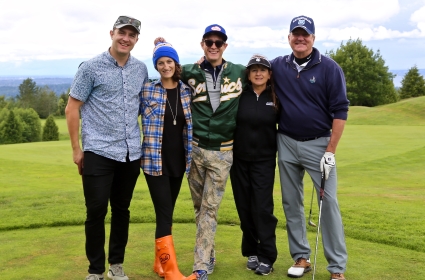 This year at the 19th Annual Amazon Golf Tournament Benefiting FareStart, we saw a sasquatch, two storm troopers, and nearly two hundred and fifty golfers committed to getting under par while supporting our work. Together we raised over $247,000 to support FareStart. The whole day was a hole in one!

We also want to give a special shout out to sponsors that provided food and drinks in-kind: Blazing Bagels, Two Beers/Seattle Cider and Silver City Brewing.

Our volunteers stepped up and helped make the entire day run smoothly. Whether they were driving supplies out to sponsorship tents on the golf course, checking golfers in or cleaning up, our volunteers made this event as much of a success as anyone.

After golfing through the day, there was a short program during dinner where Angela Dunleavy-Stowell and an Adult Culinary Graduate, Tennessee, shared a few words about FareStart and Amazon. 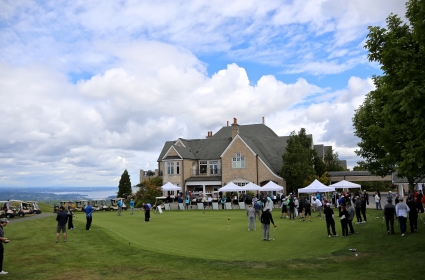 “We’ve been providing job training and opportunities to the community for 27 years,” she said. “But what FareStart really does is bring hope and success to the people in our community. We believe that everyone deserves a second chance and we provide all the tools someone would need to succeed in a second chance in life.”

Tennessee graduated from FareStart in the Adult Culinary Program in 2017 and from the stage he shared the moment he realized that there were people who cared about him and others in his situation even outside of FareStart.

“I came to FareStart for the opportunity to change my life,” he said. “I needed a fresh start. And I remember right before I graduated, our life skills meeting was cut short because Amazon had announced that they were now partnering with FareStart and were going to be supporting new eateries on their campus, Maslow’s, Community Table and Rise, to provide new opportunities for people like me to better themselves. That was the first time for me that Amazon became more than an abstract idea. It became more than an online retailer. In that moment, Amazon became human to me. I realized that Amazon, the people of Amazon, are a community of people willing to invest, they were willing to care enough about people like me to put their support, their time and their money to help us transform our lives. Amazon has a heart bigger than their market share.”